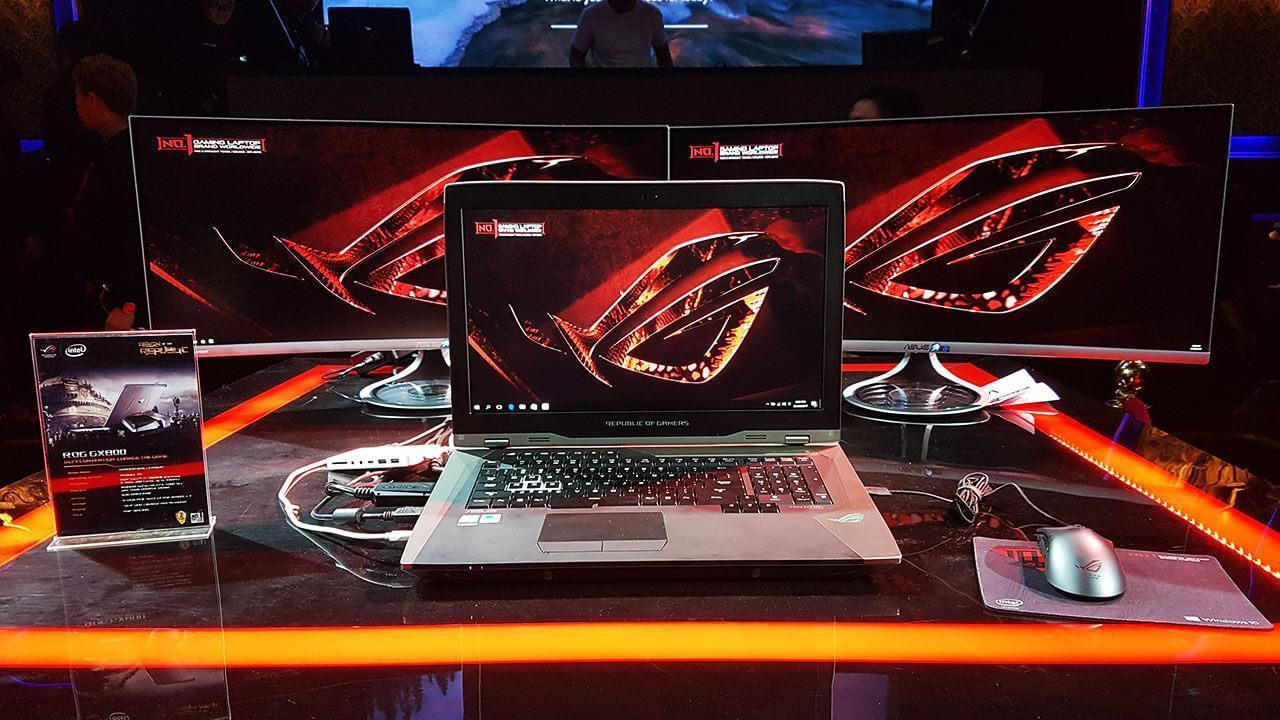 One of the centrepieces at COMPUTEX 2016, the ASUS ROG GX800 is a beastly gaming laptop that stands apart from the crowd. And for good reason, it’s one of the few portable devices to feature water cooling and for being the first to introduce water cooling to laptops with its predecessor the ASUS ROG GX700. The ROG GX800 has a few improvements over the ROG GX700. For starters, it features two NVIDIA GTX 1080 GPUs in SLI cooled by their liquid cooling ‘Hydro Overclocking’ system, an 18-inch UHD (not 4K) G-SYNC display panel and MechTAG keyboard with customisable RGB backlighting. If you’ve been drooling over these features then perhaps the price tag will bring you back to reality. It costs… a measly Rs.7,97,990 and there are very limited stocks in India.

The ASUS ROG GX800 has quite a few improvements over the ROG GX700 as we’ve mentioned previously. It sports an Intel Core i7-7820HK Kaby Lake processor which has a base frequency of 2.9 GHz and a boost frequency of 3.9 GHz. However, since the ASUS ROG GX800 has the Hydro Overclocking System for liquid cooling, they reportedly run the processor at 3.2 GHz at all times and when docked, the clock speed can hit a peak of 4.4 GHz. The Hydro Overclocking System consists of two radiators with individual fans for each radiator. These fans were calibrated with a factory preset load line on the ROG GX700 but with the ROG GX800, you now have control over the RPM. So you can have your own cooling presets.

While NVIDIA has launched the desktop GTX 1080 Ti, the laptop variant has only recently been announced. So we won’t be seeing the GTX 1080 Ti in the ASUS ROG GX800, instead it has two GTX 1080s in SLI which is a pretty good deal for gaming. Let’s just say it’s more than sufficient to run AAA games at UHD resolution on Ultra settings. And to help with visual experience, the display panel is an 18-inch UHD panel with NVIDIA G-SYNC so you’ll experience no frame tearing. Also, the GTX 1080s are reportedly clocked at 1961 MHz and the VRAM at 1300 MHz resulting in a 3DMark Fire Strike Ultra score of 10395.

And if you like to edit videos on the side or wish to have a billion browser tabs open at the same time then the 64 GB of RAM that the GX800 comes with should be more than sufficient. As for the storage, the ROG GX800 has three Toshiba 512 GB NVMe SSDs with RAID 0 support.

The keyboard is another upgrade. ASUS says they’re mechanical keys with 2.5 mm travel distance and they have tactile feedback. They’re calling it the MechTAG (short for Mechanical Tactile Advanced Gaming) keyboard and it has 30-key rollover, and RGB Aura backlighting.

Needless to say, the SLI configuration makes the unit power hungry and for that, they have two 330W power supplies which plug into the laptop and water cooling unit separately. Depending on which game you are playing and at which settings, the laptop can reportedly provide an hour’s worth of game time and with the cooling unit, that drops down further. Though we’re wondering who’d pull out such a beefy laptop for just a 30 min quickie.

The entire unit comes with its own suitcase which has all the requisite padding to transport the Rs.7,97,990 laptop around. The Hydro Overclocking unit weighs 4.7 kg and the laptop weighs about 5.69 kg, so it’s a pretty heavy package. And after counting the two power bricks which are 1.3 kg each, you pretty much have your own home weightlifting kit.

Wasn’t the ROG GX800 shown at COMPUTEX 2016?
Yes, the ASUS ROG GX800 was unveiled at COMPUTEX 2016 so it’s been close to a year since the unit was unveiled. However, the international launch happened much later towards October/November 2016 and the specifications have not remained the same. We’re just talking about the processor. Kaby Lake wasn’t even launched when COMPUTEX 2016 happened so that’s the only difference.