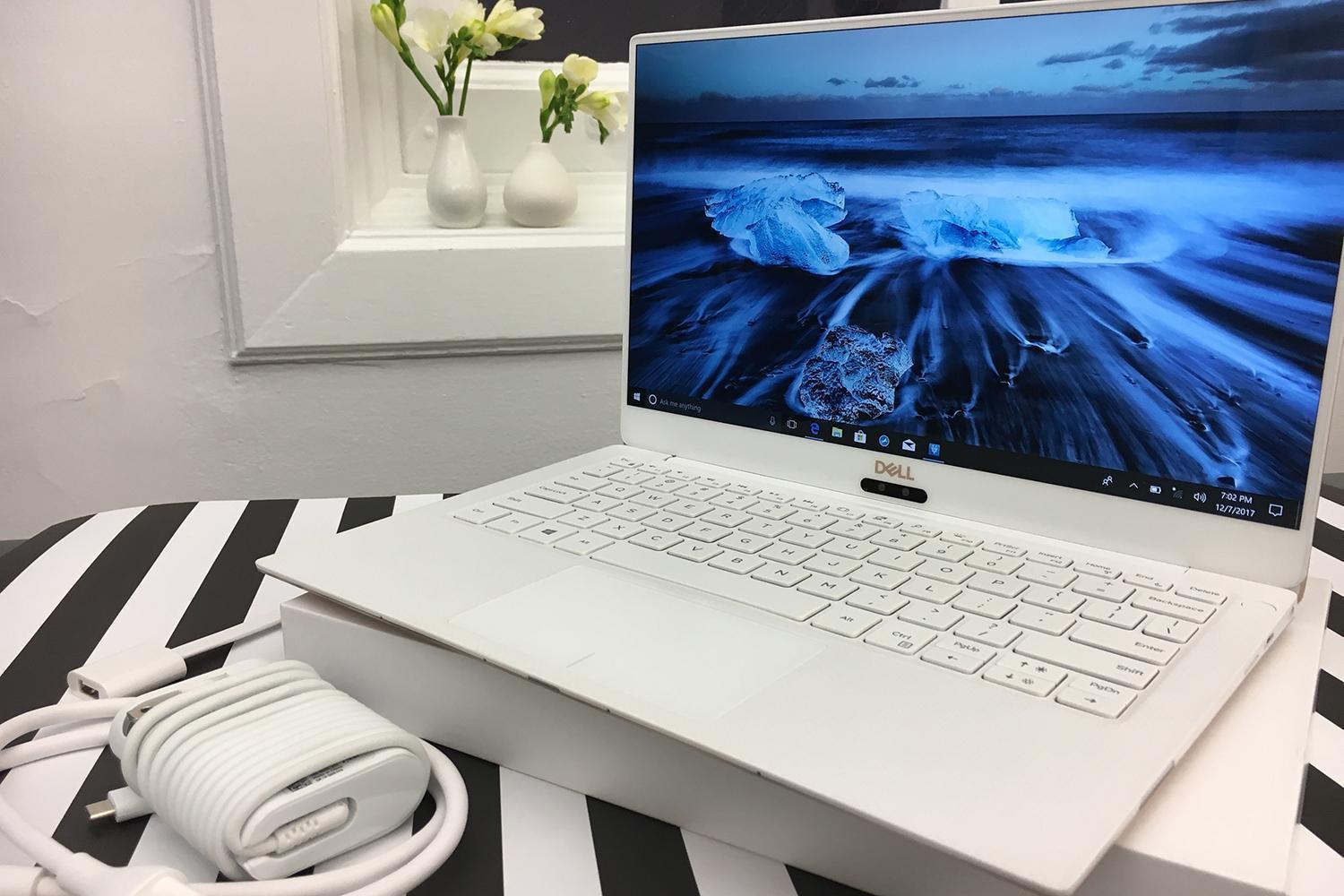 Dell’s XPS 13 has remained our favorite consumer laptop for the past few years, thanks to its beautiful nearly borderless display, lightweight and sleek aesthetic. Now, after multiple generations of sticking with the same chassis, Dell’s premium flagship has a new design with slimmer dimensions and a beautiful white-and-gold color scheme. In other improvements, Dell XPS 13 (9370) ($999 to start, $1,249 / $2,499 as tested) also offers an optional 4K display, a better webcam, support for eGPUs and a cooling system that promises stronger sustained performance.

However, to make its laptop thinner, Dell switched to a smaller battery and got rid of USB Type-A ports. which is still for sale and is powered by the same Intel 8th Gen Core CPUs. If you put the last few generations of the XPS 13 in a lineup, you would not be able to tell them apart, unless you looked at the CPU sticker on the deck. However, the XPS 13 9370 stands out with its new, optional gold-and-white color scheme, along with a slightly slimmer and lighter profile. Dell also sells the 9370 in the XPS 13’s traditional silver-and-black aesthetic.

Though it costs a little bit more ($50 extra on the base model), you’ll definitely want to get the white color, because it’s just plain stunning. The lid and bottom are made from gold-colored aluminum, while the white sides and deck are fashioned from woven crystalline silica fiber.

The deck’s weave-like texture adds an air of sophistication and felt good against our wrists, though not quite as comfy as the soft-touch carbon-fiber deck on older XPS 13s and on the silver model.

Here’s how the Dell XPS 13 performed in our suite of benchmark tests:

Unfortunately, when slimming the XPS 13 down to 0.46 inches, Dell had to ditch the standard, USB Type-A ports and full-size SD card reader that appeared on all the previous generations. On the left side of the XPS 13 9370, you’ll find two Thunderbolt 3 ports, which can charge the laptop or connect to high-speed peripherals. There’s also a Noble lock slot and a battery gauge, which shows the charge level on a series of five white lights.

On the right, you’ll find a 3.5mm audio jack, a microSD card slot and a USB Type-C port, which can output DisplayPort video. Both the Dell XPS 13 9360 and ThinkPad X1 Carbon have standard USB ports in addition to the Thunderbolt 3, while the HP Spectre 13 also lacks USB Type-A connectors.

In a major improvement over the XPS 13 9360, the 9370’s Thunderbolt 3 ports support four-lane PCI connections so you can use the laptop with an eGPU (external graphics card) that enables serious gaming. Prior models had only two lanes of PCI connected to their Thunderbolt 3 ports, so they couldn’t work properly with external graphics. We tested the XPS 13 9370 with an Aorus Gaming Box 1070, and it worked.

The XPS 13 9370’s 13.3-inch, InfinityEdge display has bezels that are 23 percent thinner than the almost nonexistent borders on the XPS 7360. Because there’s virtually no frame around the top and sides of the screen, images just seem to pop more.

We tested the Dell XPS 13 9370 with both a 3840 x 2160 (4K, Ultra HD) touchscreen and a 1920 x 1080 non-touch screen. Both models offered impressive brightness, color quality, and sharpness, though the 4K screen was noticeably better. When I watched the 4K movie Tears of Steel, the neon pink and green lights impressed on both displays but were richer on the Ultra HD panel. Fine details, such as the wires on a robot’s body and the wrinkles in a character’s jacket, stood out on both panels, and colors stayed true, even at 90 degrees to the left or right.

The XPS 13 9370’s side-mounted speakers deliver audio that’s loud, but rough around the edges. When I played AC/DC’s “Back in Black,” the music was boisterous enough to more than fill our lab, but the guitar and drums were a little harsh and tinny. The pre-loaded Waves MaxxAudio software allows you to fine-tune the equalizer. Disabling MaxxAudio, which is on by default, made the music sound hollow and distant.

The XPS 13 9370’s keyboard offers a solid typing experience, even though the keys are a little on the shallow side. Perhaps because the laptop is so thin, the keys have 1.2 millimeters of travel (1.5 to 2mm is common on mainstream laptops), but they make up for it somewhat by providing a good 72 grams of required actuation force. On the Tenfastfingers.com typing test, I reached a modest rate of 94 words per minute with a 4 percent error rate, which is on the low end of my normal range.

Whether I was double-clicking on icons or highlighting small pieces of text in an article, the 4.1 x 2.4-inch, buttonless touchpad provided extremely accurate navigation, without any sticking or jumping. The left and right click areas provided just the right amount of tactile feedback. The pad also responded immediately and accurately to multitouch gestures such as pinch-to-zoom and three-finger swipe.

For this review, we tested two different configurations of the XPS 13 9370. The high-end model sported a Core i7-8550U CPU, 16GB of RAM, a 1TB SSD and a 4K touchscreen, while the mainstream model had a Core i5-8250U processor, 8GB of RAM, a 256GB SSD and a 1080p non-touch screen. From surfing the web to light gaming and writing portions of this review, both versions of the XPS 13 9370 handled everything we threw at them, without a hiccup.

Thanks to Dell’s new cooling system, these laptops were also capable of delivering better-sustained performance on long tasks, such as compressing a 4K video or running the same benchmark 10 times in a row.

As they heat up during intense tasks, most laptops slow their CPUs down to cool them down. Because it uses a new thermal setup with dual fans, dual heat pipes and special thermal insulation, the XPS 13 9370 is able to prevent its processor from throttling as aggressively as many other laptops.