iPhone VS OnePlus 8T: Which should you buy? 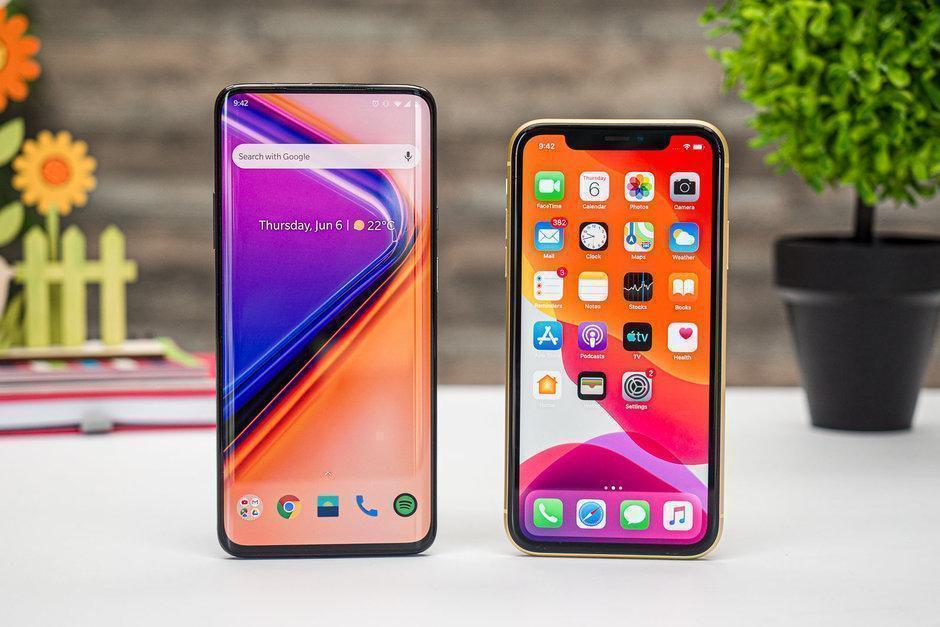 Last week, we saw two major smartphones announced in the mid-price range. The first is the OnePlus 8T, the newest “T” refresh of the OnePlus 8 lineup. The second is the iPhone 12, the latest in Apple’s long-running iOS smartphone series. So, we decided to pit the OnePlus 8T vs iPhone 12.

Which one comes out on top? That’s just what we are going to discover together as we place the OnePlus 8T vs iPhone 12. Keep reading to check out our pick of these two phones.

The iPhone 12 uses an aluminum chassis, and it has a 6.1-inch OLED 2,532 x 1,170 resolution display. It still sports a huge notch that houses its front-facing camera and face recognition software. The display is protected by a new material called Ceramic Shield, which adds nano-ceramic crystals inside the glass. This is supposed to offer better protection against drops compared to previous iPhone models.

The OnePlus 8T includes a 6.55-inch Fluid AMOLED display, with a 2,400 x 1,080 resolution. It throws in a 120Hz refresh rate for a smoother performance while playing games. It has a punch hole on the top left corner for its front-facing camera. You can also access an in-display fingerprint sensor. It includes a frosted glass back, and metal on the sides.

Inside, the OnePlus 8T has the same Qualcomm Snapdragon 865 processor included in the earlier OnePlus 8 phone. The company is releasing two models; one with 8GB of RAM and 128GB of storage, and another with 12GB of RAM and 256GB of storage. The iPhone 12, on the other hand, includes the new A14 Bionic processor with a six-core CPU and a four-core GPU. We will have to wait for our full review to see if Apple’s new processor beats the Snapdragon 865 chip. We don’t know what the RAM amount is inside the iPhone 12, but it does have 64, 128, 256GB storage options. Neither phone offers expandable storage, and neither has a headphone jack.

The OnePlus 8T has a big 4,500mAh battery. In the box, it throws in a Warp Charge 65 USB-C charger. It will charge up this big battery to 100% in just 39 minutes. We don’t know the size of the battery inside the iPhone 12 yet. However, we do know that it supports a new accessory format called MagSafe. It’s used for a new class of accessories that uses magnets that attach to the rear of the iPhone 12 models. That means accessories like cases, wireless chargers, and more all connect magnetically to the back of the iPhone 12 series.

The OnePlus 8T has four rear cameras sensors. They include a 48MP main sensor and a 16MP ultra-wide camera. The phone also throws in a 5MP macro camera and a 2MP monochrome sensor. In our review of the OnePlus 8T, we stated that the images that come from this quad-camera setup were somewhat disappointing, including mixed results with night mode shots. The phone also has a 16MP front-facing camera.

The iPhone 12 includes just two rear cameras: a 12MP wide sensor, and a 12MP ultra-wide camera. It also has a 12MP front-facing camera. We haven’t yet tested the iPhone 12’s cameras at the moment of writing. However, Apple claims that it offers support for HDR and Dolby Vision HDR video recording at up to 30fps. The phone will even allow users to edit their Dolby Vision HDR video clips on the phone.

The OnePlus 8T comes with Android 11 out of the box, along with the company’s Oxygen 11 skin. This new version of OxygenOS makes the phone look and act much less like a near-stock Android phone compared to previous OnePlus handsets. That includes adding a new OnePlus Sans font, a new Always On Display, along with improvements to Dark Mode and Zen Mode. OnePlus has promised at least two major Android OS updates for the OnePlus 8T, along with an extra year for security updates.

Read more: Everything you need to know about Oxygen OS 11

The iPhone 12 ships with iOS 14. It includes new features like supporting widgets on the phone’s home screen, along with the App Library that helps to better organize a user’s phone apps. It also adds picture-in-picture support for watching videos or conducting FaceTime calls, while continuing to use another app on the phone. Apple has an excellent track record of supporting previous iPhones with new OS updates for years, and we don’t think this will change with the iPhone 12.

Pre-orders for the iPhone 12 have started. It will officially go on sale at Apple stores on October 23. Pricing for the iPhone 12 starts at $749 for the 64GB version.OnePlus 8TBetter than the OnePlus 8, but still not as good as the OnePlus 8 ProThe latest flagship from OnePlus features some relatively subtle upgrades over the OnePlus 8. However, it does feature a huge new feature: Warp Charge 65, which will allow the 8T to charge faster than any other OnePlus phone.

Apple iPhone 12 seriesFour to choose fromThere are a total of four new iPhones in Apple’s iPhone 12 lineup: the iPhone 12, iPhone 12 Mini, iPhone 12 Pro, and iPhone 12 Pro Max. Brighter displays, faster processors, and more durable build quality are what you can expect with all four of these new phones.

OnePlus 8T vs iPhone 12: Which should you buy?

Since the iPhone 12 has yet to be released as of writing, all we have is the paper specs to compare it to the OnePlus 8T. In our review of the OnePlus 8T, we did note a number of its solid features. Those include its larger 120Hz display, its support for the fast 65W battery charger, and having Android 11 ship out of the box with the Oxygen 11 skin. Having a phone that costs $50 less than the iPhone 12 but one that offers twice as much storage as its lower price rival is something to consider. However, it’s disappointing that only the T-Mobile OnePlus 8T Plus model has an IP68 rating.

Want to check out some other options? These are the best Android phones you can buy today

The iPhone 12, on the other hand, has the OnePlus 8T beat in some areas. One is that the iPhone supports wireless charging, which is something that the OnePlus 8T really should have included.  The new A14 Bionic processor could also beat the Snapdragon 865 processor, at least in benchmarking tests. We will also have to see if the cameras onboard the iPhone 12 create better images than the OnePlus 8T, but its support for HDR and Dolby Vision HDR video recording is already pretty impressive.

If you can’t wait for our iPhone 12 review, we would say that the OnePlus 8T should be a solid pick over Apple’s phone for people who can ignore some of its camera issues. We will update this post when we put the iPhone 12 to the test.

Previous article
Mi Mix to arrive in 2021 with new features
Next article
Micromax makes Note 1 in India_Price Starting at Rs. 6,999