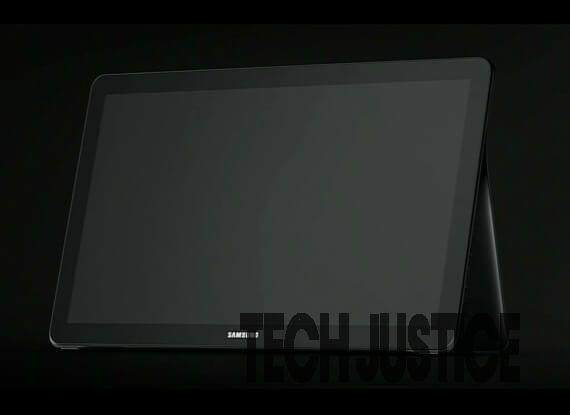 The market for kitchen tablets is expanding and after the Alcatel OneTouch Xess from a few months ago and the two-year-old Sony Tablet Z Kitchen edition, the Samsung Galaxy View is next in line. The 18.4-inch monster has been a regular at the rumor mill for a while, but has now been listed for pre-order at Adorama.

The listing reveals key specs of the tablet, not that they were exactly a secret. The large display comes with FullHD resolution for a density of about 120ppi, hinting that it’s not to be used at arms length. The Exynos 7580 SoC powers the Galaxy View, its processor clocked at up to 1.6GHz. Interestingly, the retailer calls the chip Carmen2, the first time we’ve seen that moniker. The specsheet goes on with 2GB of RAM and 32GB of storage, which can be expanded by popping in a microSD card up to 128GB. You get a 2.1MP front-facing camera with FullHD video recording, and thankfully you are denied the opportunity to use the View as a camera – there’s no rear shooter.

There’s a full connectivity suite aboard the View, with quad-band 3G and Cat.6 LTE, and a Wi-Fi-only model may be available too. Either way, the entire WiFi 802.11 a/b/g/n/ac range of standards is supported. There’s Bluetooth v4.1 and GPS with A-GPS and GLONASS, though we’re hard pressed to imagine a case where you’d use the 18.4-inch for in-car navigation.

The battery inside the tablet has a rather modest 5,700mAh capacity, though Samsung promises 8.5 hours of video playback out of it. Not much detail is revealed on the kickstand, but by now we’re expecting it to be a permanent fixture. You can pre-order yours today for $599.