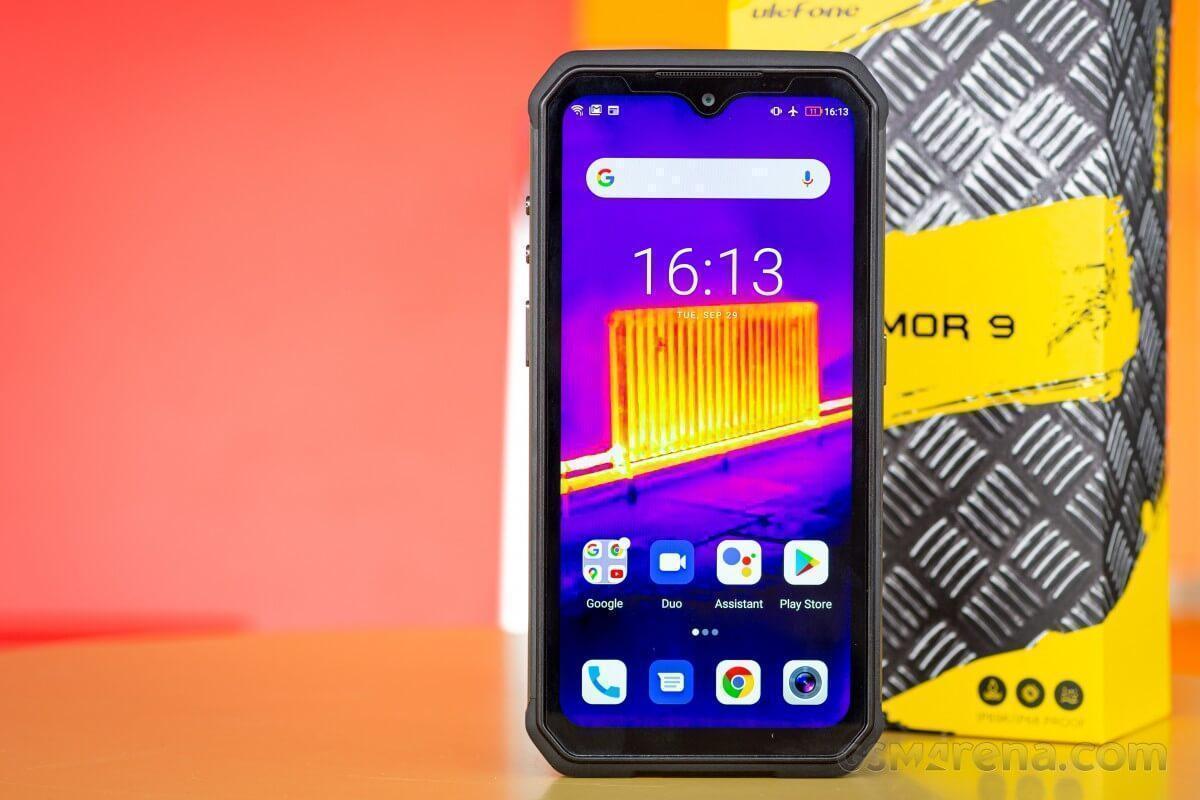 The Ulefone Armor 9 name speaks for itself – it’s a heavily rugged phone that’s not just built to last, but to survive dangerous encounters and live to tell the tale. The Armor 9 is an incredibly resilient smartphone, which can become an invaluable all-in-one tool for construction workers, mountaineers, and even first responders thanks to its integrated thermal camera and endoscope support.

The Armor 9 looks like a big fella and indeed it is. The phone is drop-, shock-, water-, dust-, pressure-, temperature-, solar radiation-, and whatnot- resistant and it looks sure like it’s wearing a heavy armor. The front glass is also scratch-resistant, but Ulefone will give you some extra piece of mind with additional protectors.

As a smartphone, the Armor 9 falls into the mid-range category – it has a 6.3″ 1080p LCD screen and is powered by the Helio P90 chipset coupled with 8GB of RAM. It has a dual-camera on the back – 64MP+2MP, and a single selfie snapper at the front. It is equipped with an impressive 6,600 mAh battery that should last you for days on a single charge.

What’s most interesting of the new Armor 9 is the thermal FLIR camera at the back, which can help you find warmer or cooler spots in various environments, see what’s in the dark, find leaks or even wall fires that are invisible to the naked eye, measure temperatures, among other applications.

Then the Armor 9 has an endoscope mount. If you purchase the optional endoscope accessory, then you can securely mount it on the phone without exposing the USB port to the hazardous environment (this is how third-party cheap endoscopes are attached). And with this endoscope camera, you can see what’s inside vents, behind heavy furniture, within walls, and various inaccessible spaces.

As you can see, the Ulefone Armor 9 goes a step beyond your run-of-the-mill rugged phone. It is an all-in-one device with the capabilities to help various people in their line of work. It can go where no normal phone can go. It may save you or your company some money if you needed to hire people with thermal or endoscope camera, and it may even save some lives by finding potential electrical faults or fires.

It seems the Armor 9 has everything but finesse. And we are very eager to put it through some tough moments and we sure hope it will survive and we keep doing things with this Ulefone for a long time.

If you are a fan of the deluxe bundles that are abundant in accessories, look no further than the Ulefone’s. The Armor 9 box contains the phone itself and the two vital companions – a red USB-c cable and an 18W charger.

Inside, you will also find a microUSB-to-USB-C adapter, a USB OTG cable, and even a wrist sling, which you can attach to the gigantic hook on the back of the Armor 9.

That’s not all. Ulefone is also shipping the Armor 9 bundled with a tempered glass screen protector. Nice!

There are some manuals inside the box, which we suggest you go through unless you are familiar with the principles of operation of thermal cameras.

You can buy the Armor 9 with two optional accessories.

The first one is the Multifunctional Protective Case. It is one super rugged case made of TPU plastic for the back and rubber frame with reinforced corners that will absorb even more shock than the Armor 9 offers by default.

This case comes with two detachable accessories itself – a 180-degree rotatable back clip, and a secure carabiner that you can use instead of the clip.

Finally, you can opt for the endoscope accessory, which can be mounted on the side of the Armor 9. It is IP67-rated and comes with a 2m-long cable and six LEDs with adjustable brightness. It offers three different adapters for the endoscope’s camera – a hook, a reflecting mirror, and a magnet. You also get two small screws and a screwdriver, so you can attach the endoscope securely to your Armor 9.

The Multifunctional Protective Case ($29.99) and the Ulefone Endoscope E1 ($49.99) are sold separately, but they are very reasonably priced and complement the Armor 9 very well.