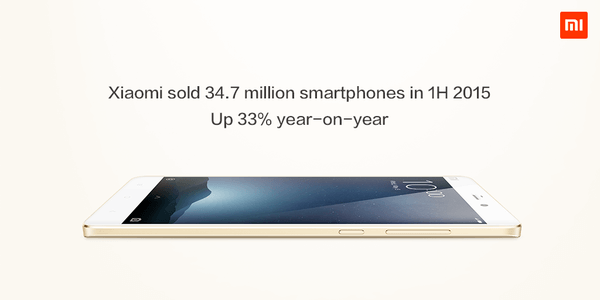 Xiaomi in on a roll – just five years into its existence, it has already become a force to be reckoned, even managing to claim the honorable title of world’s third largest smartphone manufacturer in Q3 last year. Previous reports indicated more amazing sales numbers for the first half of 2015, which today the Chinese company officially confirmed.

34.7 million Xiaomi smartphones were sold during the first six months of the year. This constitutes a 33% increase over the same period in 2014. These are definitely numbers worth bragging about. It is also worth noting that Xiaomi has been doing quite well with the rest of its diverse product lineup. The company is constantly expanding its portfolio with smart home appliances, network and storage equipment and various small gadgets and accessories, all marketed with competitive price tags and an Apple-like approach to style and brand-recognition.

With powerful budget-friendly offers, such as the Xiaomi Mi 4i and surprisingly nice high-end devices, like the Mi Note and Mi Note Pro, it comes as no surprise that the company is running circles around most other Chinese brands. And with eagerly-anticipated devices, such as the Mi 5 flagship on the horizon, as well as a constant push to expand to new markets, the future is definitely looking bright for Xiaomi.