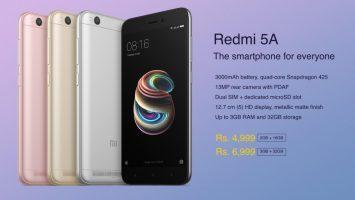 Xiaomi Redmi 5A Price In India Xiaomi Redmi 5A price in India is expected to be Rs. 4999. Redmi 5A is due to be launched on December 2017 and will be Flipkart exclusive. The 32GB variant costs around Rs. 4,999. The Xiaomi Redmi 5A comes in multiple colour options like Black, Golden, Rose Gold which are also priced the same.

Xiaomi Redmi 5A runs Android 7.1.2 Nougat. The smartphone has a 5-inch HD IPS display. The other variants of this mobile are Redmi 5 andRedmi 5 Plus. It has a 13MP rear camera with an LED flash and a 5MP front-facing camera. The device is powered by a 1.4GHz quad-core Snapdragon 425 processor and 2GB RAM. It has 16GB internal storage which can further be expanded via a microSD card up to 128GB.Connectivity options include 4G, Wi-Fi 802.11 a/b/g/n/ac, Bluetooth 4.1, GPS, and a microUSB 2.0 port. The device is powered by a Li-Ion 3,000 mAh battery.
Advertisement